A ghost story in your own home: Pilot collaboration between Sort/Hvid and Khora

While society has been in a lockdown imposed by COVID-19, the Sort/Hvid theatre and production company Khora Virtual Reality have joined forces to imagine a virtual theatre app. The outcome of this collaboration can now be experienced via the Haunted by the Future app, which tells a ghost story through your phone.

You’re in your living room. You hold your phone in front of you. Through the camera, everything looks normal. Suddenly, the screen begins to flicker. You sense a figure. A ghost. And then a girl’s voice starts whispering to you…

Haunted by the Future is the result of an experiment between Khora Virtual Reality and the Sort/Hvid theatre. Throughout the recent lockdowns, they worked together on the development of a digital theatre. Via a smartphone app, the audience gets a completely unique theatre experience in their own home. Via the app, fiction collides with the audience’s reality. The characters in the story move virtually around the audience’s own living room and speak directly to them. Haunted by the Future experiments with an entirely new theatrical format, the first step towards further experiences of this kind.

Digital theatre in the age of the pandemic

Sort/Hvid’s artistic director Christian Lollike has long wanted to work with the virtual and augmented digital formats that Khora Virtual Reality specializes in. Lockdown was an obvious opportunity to test the collaboration and experiment with the development of a digital format. The expansion of the theatre’s artistic field of activity was made possible by a grant from the Statens Kunstfonds grant ‘Together for art,’ which targets artistic development within the changing conditions brought on by the pandemic.

“We imagined a format that used technology to move the story into the audience’s home. In a way, the work was inspired by the confinement here, which has been ongoing since March 2020. In Haunted by the Future, the audience is not just sent home; they are also haunted,” says Christian Lollike, who is behind the script and instruction of the app performance.

A new method for a new format

The resulting pilot project is a hybrid between digital film and theatre, which lasts approx. ten minutes. Two actors bring to life the ghosts of the action, which are recorded on the green screen using volumetric video. Since then, Khora Virtual Reality has animated effects, added filters and created a soundtrack that amplifies the horror of the story. Finally, the audience must activate the narrative themselves in their own home.

A format with international perspectives

“It does not look like any format we have made or seen elsewhere in the past. We have tried completely new technologies that have not been used for storytelling before – and not at all in app form!,” says Simon Lajboschitz, CEO of Khora Virtual Reality.

He believes that the digital and cinematic form of theatre is not restricted to the lockdown situation, but can become a model for an international and more financially sustainable theatre production.

“An app can be distributed to the whole world with one click. That is also why we have recorded Haunted by the Future in English. One could make entire series in this format with short, intense experiences that transform your home into a scenography for an interactive theatre. Imagine an export success in line with a Danish TV series. It is a completely new country for the theatre, which is often local, but conversely expensive to produce,” says Simon Lajboschitz. 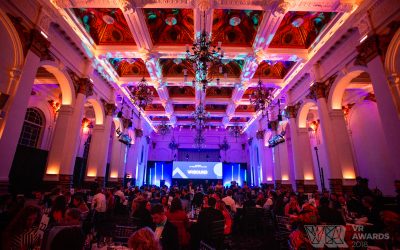 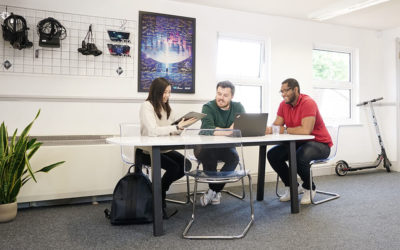 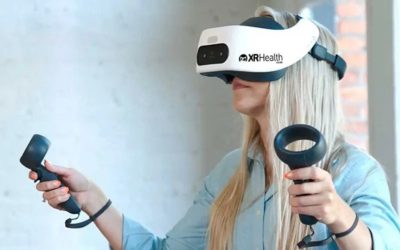