How to show 3D in a 2D world: The future of AR holographic communication 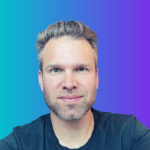 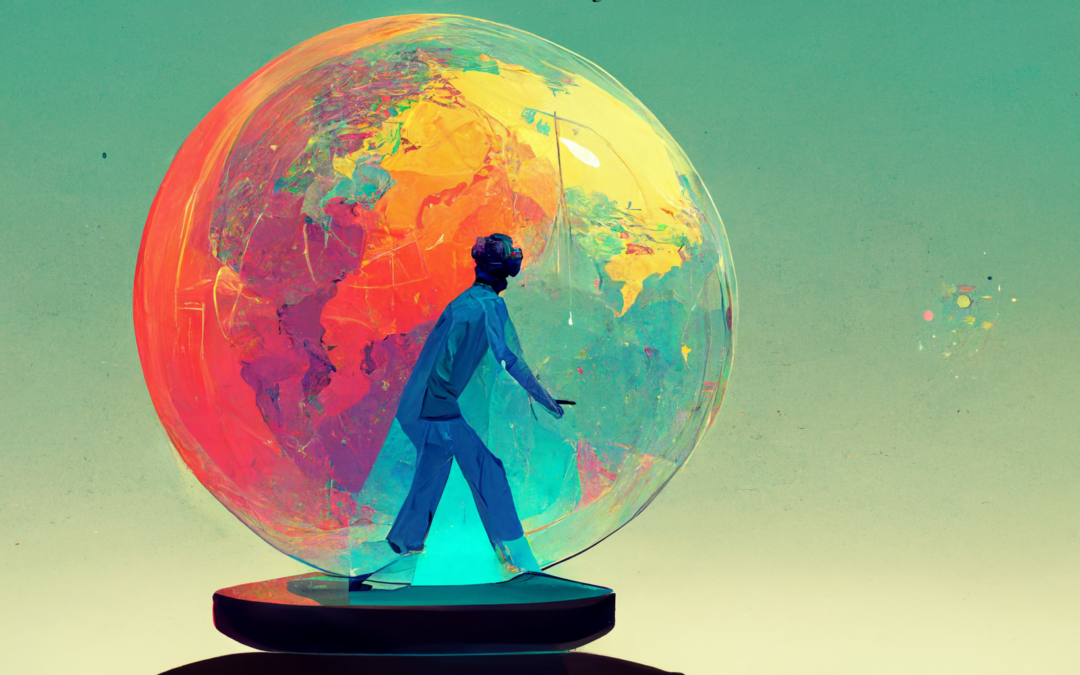 After having had the pleasure to ‘showcase’ Holoway Studio to different audiences, ranging from tech enthusiasts, XR investors, all the way to my grandma who is turning 90 (and is somewhat the reason we’ve started this journey, more on that a different time), we’ve come to realize it’s not that easy to show augmented reality in how it functions and discovered that it is sometimes harder than thought beforehand to explain what the fuss is all about, especially when being limited to either a slide deck, a video or best case scenario, a smartphone. You’ll easily get stuck with the limitations of 2D wanting to show the incredible possibility that lies in augmented reality, 3D.

What does Holoway Studio do?

But before we get into ways of effectively bringing across the message of 3D products, we’ll explain what Holoway Studio is all about and how we face (pun intended) this problem when explaining our mission: Bringing the power of faces to digital communication strategies. We want to augment digital communication, and especially facial communication, through the use of holograms. Our ready-to-use API allows companies to instantly start experimenting with human holograms, throughout all the touchpoints businesses have with either their end customers, suppliers, employees or network in general. And this, in all departments of their organization as well.

After having launched our second app AiR Hologram back in April, where our users are actively sharing human holograms with each other, we carefully started building towards the next milestone reasoning that this should be just the beginning of opening up our technology towards more use cases. Since the start we’ve wanted to create a way in which we could provide the proprietary technology we use in AiR Hologram to all kinds of businesses and organizations, helping them with new ways of digitally communicating with their customers. We are convinced that holographic communication will make up part of the way future businesses will interact with their customers. And to make it possible to start experimenting today with holograms, from the start, we’ve chosen to excel in offering holographic communication just by using your smartphone or tablet.

We’ve got to look at those devices that are already in front of everybody’s eyes, namely smartphones and tablets. Billions of them are in circulation offering us thousands of ways to start experimenting with holographic communication, right now.

If you look at the distribution of devices that make augmented reality possible, you would be baffled about the number of devices being sold versus what you get to read all day about augmented reality and thus some ingredient of the metaverse. In short, there are more than 6 billion smartphones in circulation and only a few million AR or VR devices, in total…

And if you would compare this with all the digital communication that is been sent throughout the day, every day, you quickly come to realize that the way to start introducing augmented reality, in our case human holograms, is through smartphones or tablets, without a doubt. We sent billions and billions of digital messages per day: through video, voice message, text, mail… not taking into account all messages that are being sent through all the platforms we visit every day. 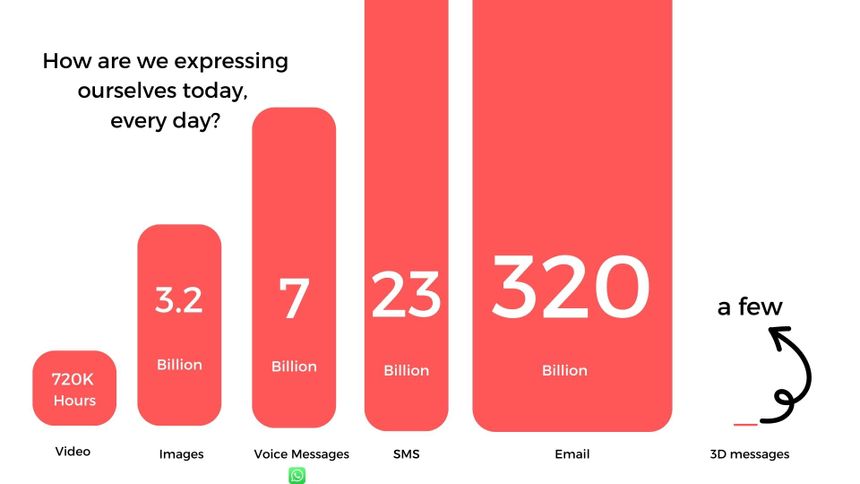 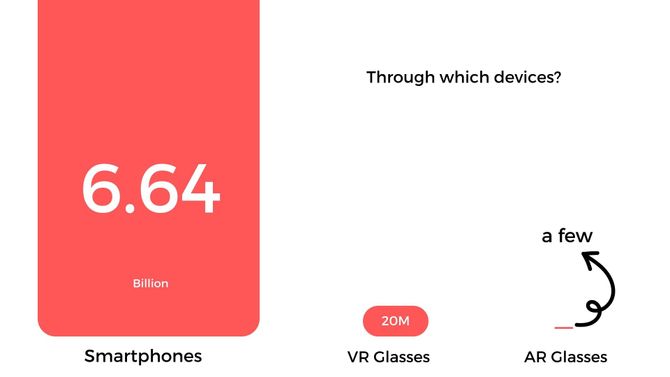 The potential of 3D Communication

In our case, what if we could just convert 1% of those messages to human holograms? Millions and millions of people would start to become acquainted with 3D communication, holograms, and all other 3D-related messages. And we would start to become more engaged with all things 3D because the word was out (again, pun intended), the message would pass everybody’s lips, in 3D, that augmented reality is a great thing to help yourself, each other, to discover the world in as many layers as there are ways of thinking about it. And we would all start carrying AR glasses and start caring about the messages we could eventually share with each other, in perceived proximity, cause the word was out, and the word is all we ever needed, to bring across an idea, a vision, a new world to be. Or is it not?

If you, like me, just briefly got carried away and started envisioning our future coming ten, or twenty years from now, then you too, probably, have already used AR applications. You might even have tried on a headset or two, but you are also the same person that every time and again asks the same question: ‘how would that work?’ and ‘how does it look like?’ and yes, that too, ‘Can you show me?’

6 Things to Remember When Explaining AR in 2D

1. Use Things or Actions People Already Know to Lower the Barrier of Acceptance.

In general, you could say that when you want to convey the power of something new, use something old and familiar to explain how this or that would change, be repurposed or reinterpreted. When combining both a thing and an action, sometimes you can really deliver on the future experience.

For example, the image I often use of the user interface of Apple’s Camera app can be tweaked by also showing a Hologram as an action, most of the time this produces an aha-moment when talking about ‘using only your smartphone’ and telling them ‘it is as easy as capturing a selfie video’. When showing through this image I usually tend to lower the barrier of acceptance.

2. When Using Images, Flirt with Boundaries of Design to Blur Both Worlds.

Type some AR products in Google Image Search and examine how often more than not, you will see that those designers tend to flirt with the boundaries of lines to give you the experience of worlds that are blending into each other. Don’t look far. When promoting Google Maps in AR, there are some great images where you ‘get’ the idea they want to convey. The same goes for the newest app releases on the Meta Quest Pro. And of course, there are others. 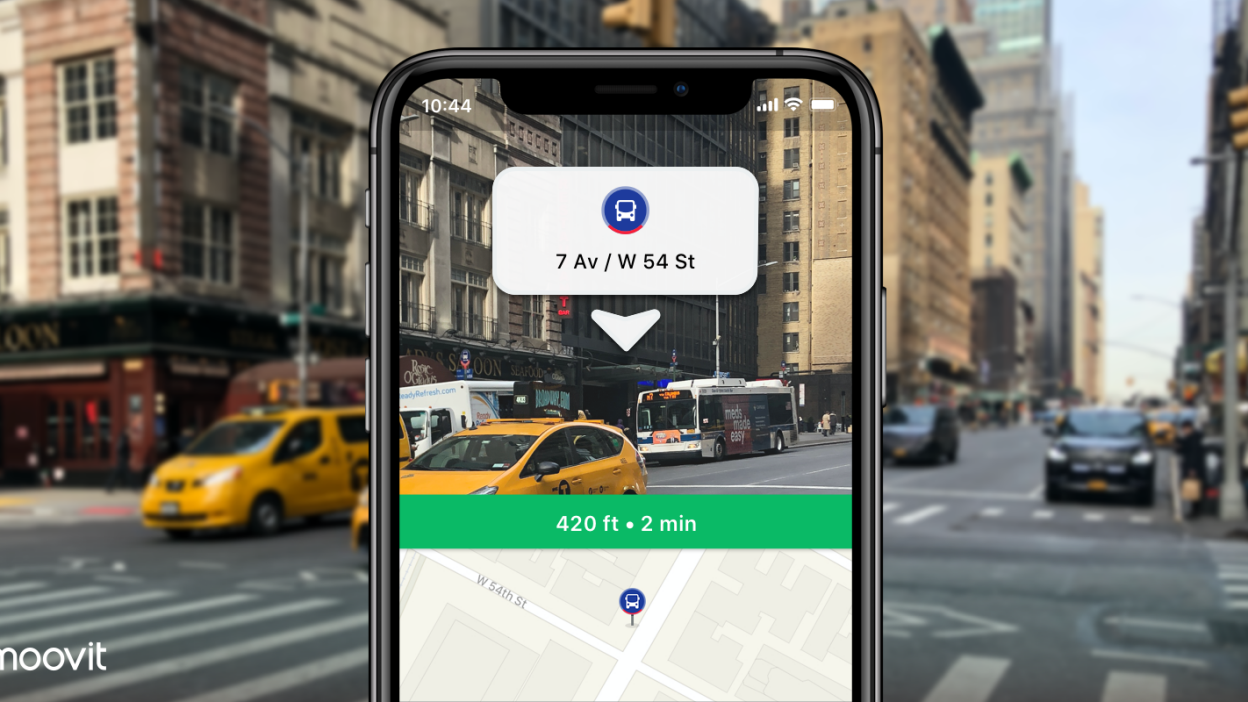 3. When Using Video, Create a Stark Contrast Between the ‘Real’ World and Your Augmentation.

Other than with still images, when using video, there are many examples where you want to show the power of AR, thus going all in on color, sensation and explosive content. ‘Snap’ is a champion in delivering those kinds of experiences, but they are not the only one. You can visit their website promoting AR here.

4) When Using Images or Video, If You Can Go Full Screen or Full Width, Don’t Hesitate and Go For It.

With video, presentations, websites, billboards etc, if you can use up all of the screen estates that your audience is using to discover your proposition, it will help them ‘forget’ about the world around them. Their focus will more easily get directed ‘through the lens’, giving you the opportunity to show new experiences easier. Pepsi is doing a great job using all of one side of a bus stop, giving people fewer anchor points, thus more immersion into that new world.

5) Let Them Fully Experience It Themselves, As Much As Possible.

If possible, let them use your smartphone, your application on any app store or a second device themselves. The old saying, an image is worth 1000 words do ring true when talking about any immersive experience. Would an action worth 10000 words have a ring to it as well?

Although VR has fewer problems with it, even then, as an immersive designer you need to guide them in what they need to do, see and feel. You’ve got to show them how to use your application, with indicators, pinch actions, guiding narrators, and so on. Even then, make it more tangible by including fingers and movements, in general, to make the experience more wholesome. But beware: people tend to forget that other reality as the video beneath shows.

6) Don’t Stop Talking About It So You Can Discover New Ways to Make Things Clear.

Maybe the even more important thing is that you ‘keep on it’, and try to explain something that is barely in existence yet and has not been experienced by many people at all. And even though this mostly will be read by XR supporters, tech enthusiasts and more, we are still so little if you look at the size of the market. We are really just beginning to experience it as mankind.

With a background in Philosophy and Economy, Thomas entered the startup scene more than 10 years ago with the right kind of curiosity to find out what trends in the digital world will have a great impact on society. This has led him to gain a special interest in XR & the metaverse, where the possibility of a huge societal impact could be enormous. He's not only standing on the sidelines but also co-founded Holoway Studio with his brother, trying to create a different, augmented form of digital communication, through human holograms and 3D communication. 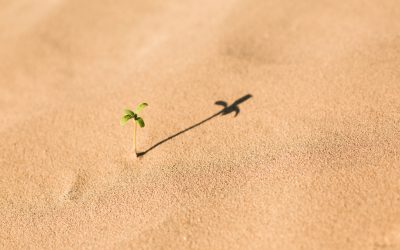 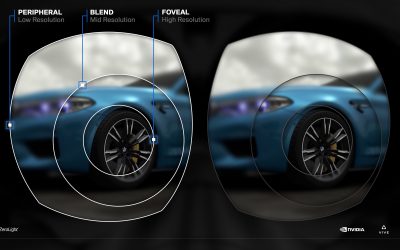